Tanba Kuro Soybeans are characterized by their large size, from about Hyakuryuju(百粒重 in kanji) 80g to 90g. Hyakuryuju(weight of 100 bean grains) is the weight of 100 extracted soybean grains measured grams. The generic black soybeans are about Hyakuryuju 30g. So Tanba Kuro have a one-of-a-kind large size in the world. When boiling them, they swell and are not easy to break. Having a black luster, exuding a good smell, and having a nice texture give them the best flavor.

Since they have a large size, beautiful appearance and good taste, their use is being extended to a variety of sweets in western confections recently. In addition, they are gaining a lot of attention about health benefits because they contain polyphenol and isoflavone.

Black Diamonds on a Field 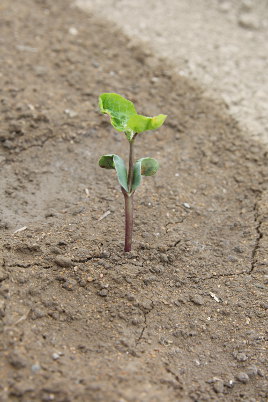 The black soybeans are usually planted in April. Harvest season generally starts in October. We can harvest produce with the best flavor for only two weeks. 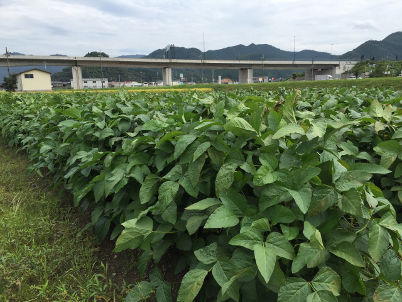 They don’t have a lot of marketplace circulation due to the short harvest season. So some gourmet crops, such as Tanba Kuro, or “Black Diamonds on a Field”, are valued highly as a rare fall flavor. 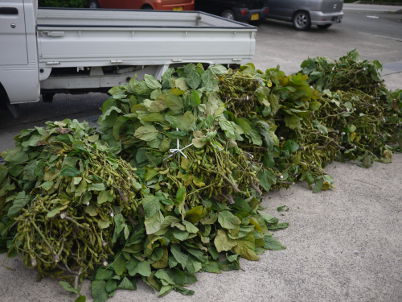 The beans’ appearance is another reason as to why they are known as “Black Diamonds on a Field”. Harvesters pick young beans before they reach full ripeness. In the shells, there exists a thin layer of skin that starts to turn into a wispy black color. When people see this effect for the first time, they often mistake it as having gone bad. However, the thin skin is full of sweetness.

How to discern high quality.

Tanba Kuro taste best in both flavor and in texture when we harvest after the branches and shells start to become a bit brown. They don’t look good because their figure has discoloration, spots, sin and worm like carvings. It is different from general green soybeans and really it’s a bean of its own.

We can determine the taste quality by comfiming “black beard”. Edamame (green soybeans) can be largely divided into three types:Ao-mame, Cha-mame and Kuro-mame due to the difference of shells and the tiny hairs. Tanba Kuro belong to Kuro-mame and the the black tiny hairs attaching to their shells is a characteristic of that type. Producers call it “black beard” and the more it has a thick beard, the better the taste.